Have you ever felt it was difficult to sit down in a low chair or bench? Have you experienced catching or pinching type pain in your hips? Have you ever tried squatting as an exercise and just found it down right difficult to perform the movement?
These symptoms are not all that uncommon, so you are not alone. Although this could be due to poor squatting mechanics or tight and restricted hips and low back you may be anatomically limited in how far you can squat. Small portions of the population have what is called Femoral Acetabular Impingement (FAI) syndrome which is basically “pinching hips”.
Femoral acetabular impingement is caused by two types of hips
1. CAM Type
2. PINCER Type
3. Mix of both (very rare) 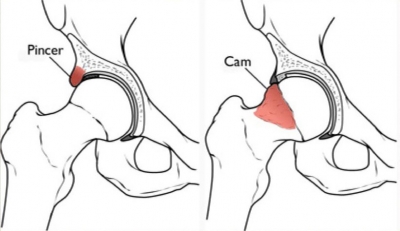 In both cases this can cause significant limitations on the range of motion an individual has within their hips. This can put other joints at risk when trying to achieve movement such as our low back and knees. Although there is not a black and white correlation between CAM/PINCER impingement and hip degeneration or damage we do have to acknowledge that these hips will not move as smoothly as others. FAI can also have a greater affect on individuals depending on their daily movement demand (for example a marathon runner vs a swimmer). Thus, we want to monitor and modify their movements to avoid excessive impingement and irritation.
One study by Mario Lamontagne in 2008 from The Association of Bone and Joint Surgeons suggests that maximum squat depth may be a good diagnostic indicator to determine if someone is suffering from FAI. However, to completely confirm the type of FAI there needs to be further imaging.
If you find yourself experiencing some of these symptoms it is always best to be assessed by an expert to determine if FAI could be something you are dealing with.

[alert type=”general”]Sign up to receive Neurohealth Chiropractic’s Free monthly health newsletter on the Right Hand Side of this page. Filled with great information and lots of easy health tips to keep you at Optimal Health![/alert]

About the Author: Steve